Home » Best of health for Australia: The experts’ priorities for the 2019 Federal Election by Shelley McInnis

Best of health for Australia: The experts’ priorities for the 2019 Federal Election by Shelley McInnis 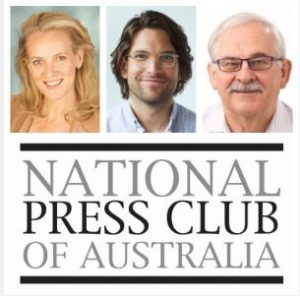 We thought we might be sprinkled around the Press Club lunch tables, so that we could schmooze with all the veteran journalists but, no. We, Wendy Armstrong, Linda Tromp, Indra Gajanayake and I, your faithful correspondent Shelley, were all shoulder-to-shoulder at Table 5. Nutritionist Rosemary Stanton was with us, too, and, intriguingly for me, especially, an expatriate American from my very own home state of Virginia. For an hour or so before the advertised health experts began to tell us what they thought should be the priorities for the 2019 federal election, we snacked on cheese and quince paste and lunched on a fabulous duck and mashed potato dish.

Three panellists were introduced by Dr. Jacqui Webster from the George Institute for Global Health, where Indra and I have decided we would love to work. Each panellist spoke for approximately ten minutes before they were all subjected to an audience Q&A. Your correspondents remained tight-lipped, but riveted. They took many notes.

The first panellist to give us his take on the state of the nation’s health and what should be done about it was the Norwegian-born Dr. Sandro Demaio, who co-hosts the ABC’s Ask the Doctor and is the CEO of EAT. EAT is, apparently, dedicated to ‘food systems transformation’. Not surprisingly, Dr. Demaio’s contribution focussed on juvenile diabetes and childhood obesity, which he described as an epidemic. As a nation, he argued, we are inactive on obesity. We need to spend more on prevention. He is a champion of a sugar tax, and believes we could learn a lot from the proactivity of other countries, including Mexico. Where are our national plans, he wondered.

The second panellist to speak, Karen Casey, former chair of the Consumer Health Forum, agreed with Dr Demaio about the relative dearth of expenditure on prevention. However, her inputs were resolutely focussed on the needs of health care consumers, which made her especially popular with your note-taking correspondents. Reflecting on the recent MBS review, for example, she said that the process had been good, but there should be an audit of outcomes to ensure consumers hadn’t suffered a reduction in access to treatments. She echoed my concerns about e-records, making me pleased I haven’t joined My Health Record. Consumers need to be pro-active in monitoring the contents of their e-records, she said. She also argued that in secondary schools where there is, apparently, no health education, programs should be introduced to help create the savvy health care consumers we need.

Our third panellist Professor Stephen Duckett, head of the health program at the Grattan Institute, is a very funny man, but I did not laugh when he declined to endorse the other panellists’ calls for more expenditure on prevention. He thinks we do rather a lot in the primary health care space, but that our efforts could be better coordinated. He grew more animated around the subject of costs and savings arguing, for example, that we could save $1.5 billion a year if all of our hospitals adopted the practices of our better ones. Such savings might offset some of the costs associated with bringing dental health under the Medicare umbrella, which he recommends on the basis that mouths are, after all, a part of the body.

With many such tantalising possibilities hanging in the air the event finished and your correspondents scattered, wondering not so much whether after the next election their mouths would continue to be regarded as orbiting satellites of their bodies, but where they might have parked their cars on that drizzly, autumn afternoon.