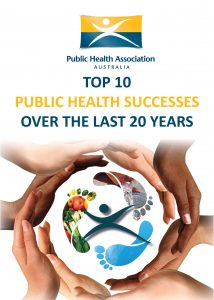 Last week the Public Health Association launched a report entitled Top 10 public health successes of the last 20 years. So many successes achieved through so much hard work, and so many lives saved!

The success I wish to focus on is the reduction in deaths due to AIDS and its continued low prevalence. It is an exemplar of how a mobilised community can change the perceptions of the public, the media and even government ministers. This perceptual change has led to improvements in peoples’ lives.

In summary, consumers became experts in the disease affecting their community and consequently came to be seen by government policy makers as legitimate players in the public health response to HIV/AIDS. If you are interested in learning more read Lessons from the history of HIV/AIDS in Australia – how activism changed the image of an illness.

On World AIDS Day (1 December 2018), Minister Greg Hunt announced that the government had approved the first HIV self-testing kit and listed a new prophylactic medicine on the PBS, which was recently trialled with great success. However, as consumers we can never rest on our laurels. While rates of infection in the gay community are consistently low, the rates in indigenous communities are concerning. The latest research suggests that they are 1.6 times as high and that infection is more likely to result from heterosexual sex.

My own father died from AIDS in the late 1980s at the height of the “AIDS panic”. The Grim Reaper was everywhere. I may be a little biased but, my father Joe Dwan was an extraordinary man who believed that the donated blood he received was given with good intent, and that everyone who had contracted AIDS was an “innocent” victim. It is through the efforts of the gay community that more people feel that way thirty years on. Dad would be pleased!