Home » Parkinson’s is not a death sentence by Katrina Muir

Parkinson’s is not a death sentence by Katrina Muir 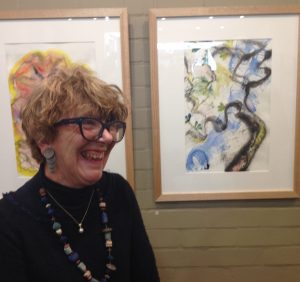 Parkinson’s is not a death sentence. The words which have stood out through my Parkinson’s journey are the ones I have learnt through my exploration of mindfulness. Mindfulness is a way of being fully present and awake in every moment; a way of relating to all of life as it happens and changes. I got my diagnosis of Parkinson’s at 55 in 2010. My eight years of teaching the Stanford University evidence-based course “Living a Healthy Life with a Chronic Health Condition” meant I believed in being a well-educated self-managed patient who wanted a virtual team of health professionals to work with me to ensure I maintained a great quality of life. I was experienced in questioning what medications I was offered, kept detailed health records and monitored any new symptoms. I also have four other recognised NDIS disabilities: rare Hemiplegic Migraines, Osteoporosis, Psychosocial and Rheumatoid Arthritis.

I established three core health specialists in my virtual team.  My Neurologist, Professor Simon Hawke at the Brain Mind Centre Sydney, my Psychotherapist and Psychiatrist Ann Harrison and my Rheumatologist Anna Dorai Raj. They work collaboratively to rationalise the multiple mind-altering drugs prescribed to me. They have encouraged me to believe in the prime messages for managing Parkinson’s, neuroplasticity, exercise, symptom management and mindfulness. All have added many complimentary vitamins to my core medications. My Neurologist has said my bouts of major depressive episodes, PTSD and high anxiety were a precursor to my getting my formal Parkinson’s diagnosis, something which is so important to constantly manage with Parkinson’s.

With the introduction of my Parkinson’s medications there was thriving in newfound creativity. The first activity I started was “Tingey Painting with Parkinson’s”. Here I could witness the multiple stages of Parkinson’s and how each member tackled their symptoms. In this united, confiding group, we meet every week in the National Botanic Gardens and are facilitated by a group of professional art therapists, who promote sessions where members can express the constant changes in our brain and body and let go of the grief associated with each loss, recall memories, keep community connections, make marks, and be part of the groups’ discussion at the end of each session on where their personal journey went while creating. Music is extremely important part of this evidence-based program, it improves our mood, an ongoing problem with our dopamine loss from our brain and provides our brains with cues to start our creative mark making process.  I feel my work is enhanced by the live performances of the Canberra Symphony Orchestra every four weeks. I also started painting at home, did online courses and learnt a few techniques, entered national portrait competitions, I was on a high with all my medication changes!

In the early days of my Parkinson’s, I was blessed with six grandchildren in four years, and they became the major recipients of the side effects of all this creativity and “mind altering drugs” I took which increased my obsessive-compulsive behaviour. The drugs’ side effects became more dominant and I discovered online shopping! I needed to laugh as my daughters recited a poem about my love of excessive gifting at my 60th birthday party. There is no regular symptom monitoring of these dangerous drugs for people in Canberra. I personally know people who have spent their whole superannuation in a 6-month period.

Next came writing, I had always enjoyed writing, had researched and written a book which sits in most of our national libraries, so enjoyed this new burst of creativity. I started documenting my experiences with “Tingey Painting with Parkinson’s” through a “beginner’s mind”. Painting with Parkinson’s also suggested I write a children’s book to help explain what is happening to me. The book, yet to be completed, is titled Wobbly Nonna, the name my eldest grandchild, Lukas gave me when he watched me trying to pass couscous on a spoon to him! Clare Saxby, an Australian author of children books, over many months taught me how to write a children’s picture book. I showed drafts to “Shake it Up”, Parkinson’s Australia, Neurologists and people with Parkinson’s. Parkinson’s buddies gave me great feedback as I was graphically illustrating many of the symptoms, they had which are taboo subjects in our society, such as living with incontinence. This symptom came prior to my Parkinson’s diagnosis and has led to being given 21 antibiotics in 18 months and two hospital admissions for delirium. No one in the ACT Health system could give me Parkinson’s specific help. MS ACT held a conference on incontinence, and I discovered experts at the Royal Prince of Wales Hospital who stopped the antibiotic cycle, introduced medications, a dietitian and continence physiotherapist to my team, vitamin supplements and probiotics for my gut health to stop this unhealthy cycle. Incontinence is shaming and over the years I have needed to advocate for places to dispose of my nappies and carry excess baggage wherever I go. My Urologist was excited when I told him I had attended a retreat where organisers actually acknowledged my needs, explained how we could dispose my aids and said they were happy to order more supplies in if I ran out.

In 2014 the National Disability Insurance Scheme, NDIS, entered my life. I was excited by the prospect. My GP of 30 years had encouraged me into early retirement due to my multiple disabling symptoms, many which didn’t at the time have a name. My husband and I have continuously forked out a fortune in medical expenses and I had curtailed accumulating a decent Superannuation nest egg. I embraced the NDIS concepts and set my long-term visions and goals with my husband Clive.

I needed to learn to advocate for my needs, as my medical team also had to learn the new NDIS language, that is, the impact of my disabilities on my life and that of my fulltime carer, my husband Clive. I found the information to support my Parkinson’s needs via the MS Society as Parkinson’s Australia has yet to embrace the NDIS with hands-on support.  It is so important health professionals working with us tell us about joining the NDIS and Parkinson’s organisations seek funding for Parkinson’s centres of support around Australia as it is the future for people with Parkinson’s. Self-Management of my NDIS funds has been central to achieving our goals.  It is a hard path with much added responsibility. I need to show gratitude to the NDIS in trusting us to self-manage our funds. They have learnt over the years through my personally explaining Parkinson’s the support we require changes as our degenerative health conditions change.

Key to managing my Parkinson’s journey is the implementation of a health management belief system Clive and I have chosen; we call it my “Health and Wellbeing” plan. It is overseen by an Exercise Physiologist and Occupational Therapist who identifies the current ongoing “Barriers to Participation” as my degenerative conditions change. I practise meditation, do extensive amounts of Yoga which I love and do Hydrotherapy, Dance, Art Therapy and specific Parkinson’s exercises. I try every day to have a 30-minute power nap, as this introduction has improved the overall quality of my sleep patterns, stopped the increase of Madopar with long term use side effects of dyskinesia. I use the US based Parkinson’s Wellness Recovery for life program as my guideline to teach what you CAN do to use your FULL potential and get the most out of life. It also about removing barriers to optimal brain health and repair by addressing the non-motor symptoms that interfere the most with your ability to participate in exercise and LIFE.

Sadly, there is no one in Australia trained to deliver this course despite the course designer being responsible for implementing the worldwide used Parkinson precursor, LSVT BIG for movement. My carefully chosen virtual team is large due to the impact of my health conditions. Each member has been given an international guideline I have researched and found outside Australia in their areas of expertise, such as Occupational Therapy management for Parkinson’s. The team also includes a periodontist and prosthodontist for oral health due to poor saliva flow and lack of manual dexterity, a neuropsychologist, podiatrist, ophthalmologist, dermatologist and ear nose and throat specialist. We as a team, enjoy the small successes where after a Rheumatoid Arthritis flare, I can now do the Yoga tree pose for nearly 30 seconds or can simultaneously catch a ball and step over hurdles! My husband zones out in his own form of meditation and respite care with cycling in Pedal Power. This year I found a retreat which accepted my disabilities, my strict diet, indulged me and gave my husband a much-needed break. These life goals would not have been able to be achieved without the small team of Support Workers we have found among the highly educated ACT residents.

We have some words which are very meaningful to us and I would like to share them with you:

The secret of life, though, is to fall seven times and to get up eight times. Paulo Coelho, The Alchemist

The following video illustrates a little about my husband and me and how we both with courage and love share a journey. It’s called My Dreams See: My Dreams here

Katrina mentions above her distress about OCD-like symptoms caused by Parkinson’s medications, and the lack of monitoring and follow up by health service providers. This experience has prompted Canberra Health Services to create a new pathway for newly diagnosed Parkinson’s patients. A trial is now underway as a quality improvement project, ensuring better information and monitoring as part of the Initial Education Pathway. This is a welcome development and shows how consumers sharing their stories and advocating for change is having a positive effect on health care outcomes.