Report on National Forum on Mesh Implants by Kate Gorman 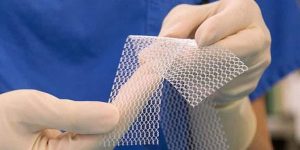 People came from all over Australia. They came with walking sticks and wheelchairs. Mesh injured women and men, their loved ones, health professionals, consumer advocates and government policy and regulation people. There were trauma counsellors on hand. There were couches at the front. There were private rooms with a place to lie down for people whose injuries meant that they couldn’t sit or stand for long.

There was a lot of crying. Crying, and also rage.

What brought them to the first National Mesh Forum was their connection with transvaginal mesh, also called pelvic mesh or simply ‘mesh’. Made of polypropylene (plastic) and looking a little like a piece of Chux wipe, mesh is an implantable medical device which has been placed into women’s bodies since the 1990’s in Australia to treat stress urinary incontinence and organ prolapse. It is also used in women and men to repair abdominal and other kinds of hernias. While in many people it does the job it was intended to do, for some people it has caused disastrous injuries which have resulted in severe, ongoing pain and devastating effects on their lives.

The forum was opened by Greens Senator Rachel Siewert, who, as parliament was sitting in Canberra, was obliged to join the nearly 250 people gathered in Melbourne and online via video link. Senator Siewert chaired the Senate Inquiry into the Number of women in Australia who have had transvaginal mesh implants and related matters. The Senate Inquiry received 555 submissions. The Inquiry report noted that of the individual women who made submissions,

Senator Siewert got straight to the point, paying tribute to the stamina, determination and commitment of the women who have been injured by their mesh implants.

“The health system didn’t listen to you”, she acknowledged. “Women were told that the problems they reported with their implants were all in their heads. The system is arrogant. Women’s experience is often dismissed. There were and remain credentialing problems around implantable devices, and a lack of adequate training, safeguards and protections for consumers. There is a lack of properly informed consent and information available. Women went into surgery in some cases without realising that they would have a device implanted.

The Senate Inquiry has made recommendations, and now the Therapeutic Goods Administration has released an action plan for medical devices, and this should have happened a long time ago. Some parts of the action plan are good, but some parts don’t go far enough. (‘Ban all mesh!’ a woman yelled out, to murmurs of agreement). We need mandatory reporting of device problems by health professionals, a register of people who have implanted devices, and identification of individual devices.

Women need counselling, information hotlines, access to their own medical records, and a simple way to report adverse events. Current resources are good but not enough. There are not enough surgeons with full mesh removal skills. There’s an ethical issue here too: women are traumatised, and don’t want to go back to the same surgeons who caused their injuries to have mesh removed.

I have chaired five of these Senate Inquiries into problematic medical devices”, Senator Siewert continued, as she came to the end of her address. Then her voice cracked and her eyes filled with tears. “I never want to chair another Senate Inquiry and witness the pain and distress of people who have been lifelong affected by an inappropriate device implanted by a medical professional who did not have the skills to do it.”

Pip Brennan (Health Consumers Council Western Australia) and Melissa Fox (Health Consumers Queensland) followed Senator Siewert, and spoke about how this story has unfolded. Just how did the system fail women so badly? The story of mesh is the story of a string of woeful failures of regulation, credentialing and safety and reporting measures which should have protected women. Estimates have been made, but no one knows how many women have this device inside them. Some estimates put the figure at as many as 100 000, with estimates of complications rates anywhere from 3%-30%. Records were not kept, in many cases, of which device (as there are many brands and types and they are constantly changing) women had implanted. Barriers to approval for using these devices were lower than they should have been.  People have not always been fully informed of the risks and possible side effects of these devices. Complaints processes have not been accessible to consumers. Credentialing of surgeons has been variable across Australia. Surgeons have not been required to report problems with the devices to the TGA. Device manufacturers have had too much influence. It’s a mess, and the list of failures goes on. Many believe that there are still women who don’t yet realise that their health troubles are due to the mesh inside them. While action is now being taken to address some of the issues that led here, some believe the worst may be yet to come, as it is the nature of some mesh injuries that they appear and then worsen several years after the initial surgery.

At the morning tea table a woman I didn’t know said to me “I was in tears hearing Rachel (Siewert) speak. I’ve never heard the reality of this issue acknowledged before. Not even my family understands what I’ve been though.”

After morning tea, more tears rolled and noses were blown as the audience watched the video testimonials of mesh-injured women and men, and their families. Woman after woman, and several men described the devastating impacts on their lives. Their continual pain, and, in some cases, the resulting addiction to pain medications. Their ongoing infections. The impacts on their social and family lives- they cannot be the mothers and partners they want to be. The loss of employment and financial impact. The loss of relationships and intimacy. Their contemplation of suicide. And over and over, that they have been disbelieved and dismissed when they have tried to have their concerns addressed.

A 39 year old woman faced the camera with her ten year old son. She asked him “how have things changed since mum had the operation?” “Mum can’t do fun stuff anymore” he replied. “And what has changed in your life?” she probed. He is unable to answer. He hides his face and cries.

Speaking at this forum was always going to be a tough gig for Professor John Skerritt, the Deputy Secretary of the Health Products Regulation Group of the Therapeutic Goods Administration (TGA). Many people lay the blame for the mesh failures squarely at the feet of the TGA, the body for which he is directly responsible. As he began to speak about the measures which were being put in place to remedy some of the systemic failures which had occurred, the rage boiled over in the room. Over and over he was interrupted by angry shouted comments from the audience, as he talked about the TGA and regulatory processes. He persisted, telling the audience that consumer pressure could be credited for the action plan to improve safety for consumers the TGA had recently announced. Mesh devices would be reclassified as a high risk device, and this would make regulatory processes more stringent. Patient information cards for all implantable devices would be rolled out over the next few years. He revealed that the Health Minister Greg Hunt would that afternoon announce the creation of a registry for people having mesh surgery. All important steps, but for many it was too little, too late. They had been told that they would have the opportunity to speak to the TGA, and they were going to be heard.

It is indisputable that the regulation of these devices has not been adequate, and the checks and balances that should have protected women have been missing or inadequate. These are things the TGA is responsible for. However, Professor Skerritt pointed out, there is also the issue of credentialing – the path a surgeon must take to become skilled and approved to implant a device. Credentialing responsibility rests with individual health services, and this has been inadequately overseen, in many cases, too.

After Professor Skerritt’s presentation, the panel took their seats for audience questions. To my surprise, spontaneous applause broke out as Newcastle obstetrician and gynaecologist Dr George Angus joined the panel. I looked at my program, where I learnt that Dr Angus was a surgeon who had never used mesh implants for incontinence and prolapse, but instead practices native tissue repair- that is, repair using the body’s own tissues.

There were lots of tough questions which got to the heart of the issues. Dr Angus held the floor for most of the time and answered them with honesty, compassion and insight:

Why have people been dismissed and unheard for so long?

“Firstly, the system is arrogant. It is part of the medical culture to think that we (doctors) know best.

We were seduced. The story of tape/mesh is seduction on a global scale. I went to one of the first conferences in the 1980’s about mesh and it was like medical Disneyland. It was in Chicago, in a fancy venue with 3 floors of promotional stuff about mesh. All the beautiful people were there to talk to us about how great this was going to be. They said ‘this is the latest and greatest technology. You’ll be a new person’. Doctors could get through many more patients. Traditional surgery for these problems took over an hour- but this took around fifteen minutes. Costs would be down. Waiting lists could reduce six- fold. Even then, some older surgeons didn’t embrace it. Although the studies were small, the data was there, showing high levels of complications. Our concerns were dismissed as a ‘learning curve which would improve over time’”

What can be done to improve the credentialing of surgeons?

Credentialing has been a problem, but it clouds this issue. The issue is mesh, not credentialing. It’s a foreign body.

Why aren’t we just banning mesh?

“The elephant in the room here is that there’s a whole generation of surgeons who only know mesh to address incontinence and prolapse issues. Medicos really believe it’s the right thing to do.”

How can we make sure that this doesn’t happen again?

“As a profession we (surgeons) are bad. You can’t leave us to monitor ourselves. Self-regulation has failed time and time again. We need an independent monitoring body which can look after consumers.”

“The system isn’t up to dealing with the problem. It doesn’t accept being challenged. How dare we criticise some of the best surgeons in the country? These are abuse of power issues.”

I finished the day in a workshop comparing notes on what the different States and Territories were doing with their mesh responses. There wasn’t much to say about the ACT yet – plans are afoot to put together a multidisciplinary mesh clinic to address women’s needs into the future, but funding has not yet been secured and the shape it will take remains to be seen. A bright point in this workshop was the presentation by HCQ which showed what must be the Australia leading response so far- the Queensland mesh service, co-created with mesh injured consumers.

The intention of this forum was to address some of the unfinished business around mesh, and to collectively come up with concrete ideas for how to move this situation forward for the affected consumers. This was an insightful, well thought out day with excellent information shared. However, the progress with concrete steps forward was not as much as hoped. People’s trauma kept bubbling through and demanding space and time to be acknowledged. Perhaps we, as consumer advocates, were one or maybe several steps ahead of ourselves. As one of the Canberra mesh injured women said to me, “You can’t just jump straight to fixing it. You’ve got to properly hear people first. These women have never been heard”.